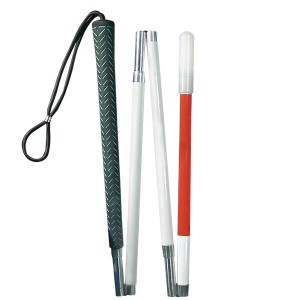 In 1921, James Biggs, a photographer from Bristol, England, became blind following an accident. Because he was feeling uncomfortable with the amount of traffic around his home, he painted his walking stick white to be more easily visible. In 1930, the late George A. Bonham, President of the Peoria Lions Club (Illinois) introduced the idea of using the white cane with a red band as a means of assisting the blind in independent mobility. The Peoria Lions approved the idea, white canes were made and distributed, and the Peoria City Council adopted an ordinance giving the bearers the right-of-way to cross the street.

News of the club’s activity spread quickly to other Lions clubs throughout the United States, and their visually handicapped friends experimented with the white canes. Overwhelming acceptance of the white cane idea by the blind and sighted alike quickly gave cane users a unique method of identifying their special need for travel consideration among their sighted counterparts. Also in 1931, in France, Guilly d’Herbemont recognized the danger to blind people in traffic and launched a national “white stick movement” for blind people. She donated 5,000 white canes to people in Paris.

Today white cane laws [2] are on the books of EVERY STATE in the US and many other countries, providing blind persons a legal status in traffic. The white cane now universally acknowledges that the bearer is blind. For specific information contact your local government office for motor vehicles.

To make the American people more fully aware of the meaning of the white cane and of the need for motorists to exercise special care for the blind person who carries it, on October 6, 1964, the U.S. Congress approved a resolution authorizing the President of the US to annually issue a proclamation designating October 15th as “National White Cane Safety Day.”

The National Federation of the Blind (NFB) [3], a leading organization for the blind, has established the third week in May as “White Cane Week.” During this week, a special concentration of efforts to educate the public concerning the hopes and aspirations of the blind is emphasized.

It should be noted White Cane Law, also extends to all persons with a Guide or Service Dog as well. Please respect the White Cane Law and what it means. Don’t be a jerk!