Youth weigh-ins where Friday night, and I rode down with Paul and his dad. Seems a waste, but all the kids must weigh in the night before. It just makes things smoother for the day to come. How ever it’s still an hours drive for a weigh in that takes all of 2-minutes. Matt and his mom opted for a hotel room to stay in.

The next day (Saturday), we drove down again, this time to fight. I find out from sensei Fred that poor Matt is THE VERY FIRST MATCH OF THE DAY ON MAT 5! And Paul was the THIRD match on Mat 6! – CRAP! Well, no time to waste. We picked up the kids match cards, and got them to run around a bit.

Opening ceremonies over, and the day begins. 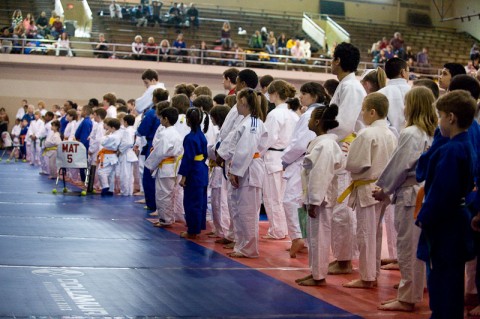 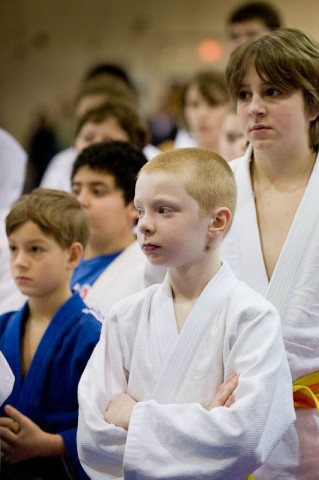 Matt was now match 8, and well… Sorry folks we lost this one. So poor Matt’s day was over in all of about 20-minutes. Paul’s turn for match number two. This time, he nailed the kid for two half-point throws. He won that one. We’re still in this.

Paul’s next match was number 23 on Mat 6. So we went upstairs he got a drink, and we hung with his parents for a while. A few matches before number 23, we headed back down, and he reported in. Paul’s up again… and… just like that… it’s over. Paul lost his 3rd match and thus was eliminated.

I do feel really bad. I was hoping for the guys to win at least a few more. But you must understand, this is a HUGE event. And people come from all over the USA, Canada, and we even had a boy from Africa who was fighting today! WOW!

So the day was over for us well before 11AM. The boys hung out up top, and watched a few more matches. I told them to stay and I snuck off with Matt’s mom to do some shopping with a uniform vender. This is such a big event, and despite the loss, I’m proud of them for simply showing up. Win or loose I already had this planned.

So, what’s a sensei to buy his students? Why, new uniforms of course! But, not just any… You see in judo, the first name called to fight should wear a blue uniform, and the second name called wears white. Normally all students wear white, and we simply use a blue belt to distinguish 1st name and 2nd name for scoring. – High level events like Nationals require the blue uniform.

So… I picked up a size 1 (Paul’s size), and size 3 (Matt’s size), blue single-weave judo uniform for them. But hush now. They don’t know the uniforms are for them! I’ll give the uniforms to them on Monday at class. How cool is that? – I know they will be thrilled. All kids love the blue uniforms! But I’m sure it may make some other students enviable.

But either way, maybe. Just maybe, it will encourage others to fight! Because I would have done the same thing for any student going to this event. Just think if I would have had to buy 14 blue uniforms!!!

Authors note. This post was composed entirely on my new 17-inch MacBook Pro!