This past weekend we attended the 2009 Pennsylvania State Judo Championships. I had six junior students attend plus Sensei Andy, Sensei Fred and myself. I think we made out alright, though I think we could do a little better. I’ve very proud of my students as for some of them, this was their first ever judo event. It’s not easy when your first ever event is the State Championships!

I had three matches myself that day in Mens Open category at 145lbs (66kg)… My first match the guy just muscled me. I went in for a dropping shoulder throw and I missed! He got in behind me, and… choked me out… The good thing is you don’t remember much…

My second match I did much better… This time again with the dropping shoulder throw I got under the guy and planted him in the center of the matt with a perfect throw – Ippon! The match was over in less then 20-seconds. Nice crowed reaction too. Every one complimented me on the nice throw!

My third match I just screwed up. It was a skinny brown-belt guy, likely on the light side of 145lbs. I had control of him; or so I thought… At one point I actually moved his whole body with a foot-sweep, but… didn’t follow threw… He scored two, 1/2-point techniques on me, and the match was over… That one upset me more then being choked-out!

My students did well: 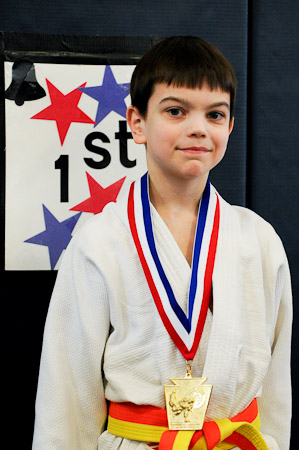 Here are a few of my photos of my friend Dr. Andre Watson (blue), member of the US Paralympic Blind Judo Team (90kg).

If you want to learn more about visually disabled judo locally, please contact the Pottstown Judo Club [1] and speak to (me) Sensei Rich, we’d be happy to help!