Well it has not been THAT bad, but you know the kind of week you just don’t feel like doing any thing? I have a sports poster I need to make for a client, and I’ve been going over in my head of what I want my judo students to do for promotions.

Last weeks Orientation and Mobility was canceled because of bad weather, and for this week it is likely to be canceled as well, we have 4-inches of fresh snow outside at this moment. What a bummer.

My judo students as of late have been off the wall… No concentrating one bit. Not seeming to care that promotions are only ONE WEEK away. No one is going for a particularly high rank; the highest being from Yellow+Orange Stripe to Solid Orange Belts, and all others are lower; and a few first timers. (The kids are aged from 7 to 12).

Even Sensei Fred got in on some action, yelling at a student in the middle of class. It’s rare I see him yell, but man… The concentration factor for the past few weeks has been the pits! I guess I’m just too soft.

The PA State Judo Championships are March 14th, and training will soon pick up, for my students and myself. Though I really don’t feel like fighting, I should. I will likely have to loose about 6 or 7 pounds to get down to my fight weight of 65kg (145lbs); that should not be too hard.

In other news, I did manage to find a photo of our friend Andre on the Getty Wire Service photo archive from the 2008 Paralympic Games. Andre [1] fights for the USA Blind Judo Team [2], and is a good friend of ours at the judo club; he comes to train with us some times. 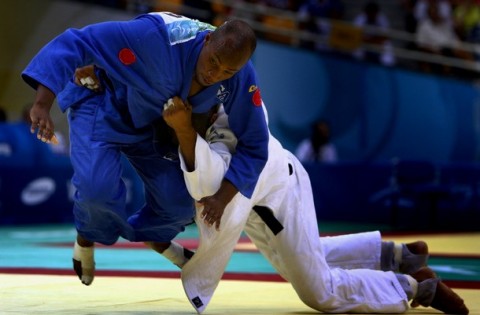 I managed to send the photo to Coach Marc, Team Leader for the USA Paralympic Blind Judo Team (whom we know from Andre); to which I get the always-prodding e-mail reply of… “Just think, in 4-years you could represent the United States in London. It would be a shame to see your judo talent go unrewarded.“

Well, yes… Most normal people would say GO FOR IT are you NUTS… But we do still have that travel anxiety we’re working on, remember? And to be honest… I don’t know why he thinks I’m that good… It’s not like I compete every month… Then there is that little thing about qualifying for the team first they forget to tell you about.

The fact is there are very few visually impaired judo players in the United States; and when one comes along, the coaches do every thing in their power to try and snatch us up. So, as much as I’d like to cross the pond; I think I need to take some smaller steps first.

Your comments are always welcome. And I will likely be posting a little more information about Blind Judo in the future, even the process of becoming a Paralympic Judo player, if you’d like to know.